Preliminary Visit to Infanta and Real, the Philippines as part of the PANTROPOCENE project.

On January 27, 2022, I began what would be a three-day visit to assess a few historically significant sites in the municipality of Infanta and its neighboring town of Real (Fig. 1) in Quezon Province. This preliminary visit was to explore if we can include Infanta and Real as potential sites the PANTROPOCENE project and sought to better understand changes in settlement patterns, buildings, and environmental relationships in this part of Luzon following the arrival of Spanish colonialism. Infanta and Real have shared histories. Real was originally a barrio of Infanta until 1960 when it was made into its own municipality. Both locations saw Indigenous populations face different processes of incorporation (or not) into Spanish-brought economic, political, religious and demographic systems. This included the emergence of church buildings, ports, and industrial economic activities.

Our visit was initiated by the persistence of Alfredo “Jhun” Darag, a local historian, from Infanta. He approached one of our colleagues at the Archaeological Studies Program (ASP), University of the Philippines some years back when he visited the field school in Burdeos. Local historians often provide critical insights into important historical sites and Jhun wanted archaeologists to survey Infanta and Real for sites of economic importance he had identified based on his reading of the archives. Alongside head of the ASP, Grace Barretto-Tesoro, I was joined by Anna Pineda and Taj Vitales who acted as representatives of the Tuklas NGO (http://tuklas.org.ph/) which develops outreach workshops, seminars, and public lectures that will help tourism representatives and teachers to disseminate information generated by archaeological research in the Philippines. 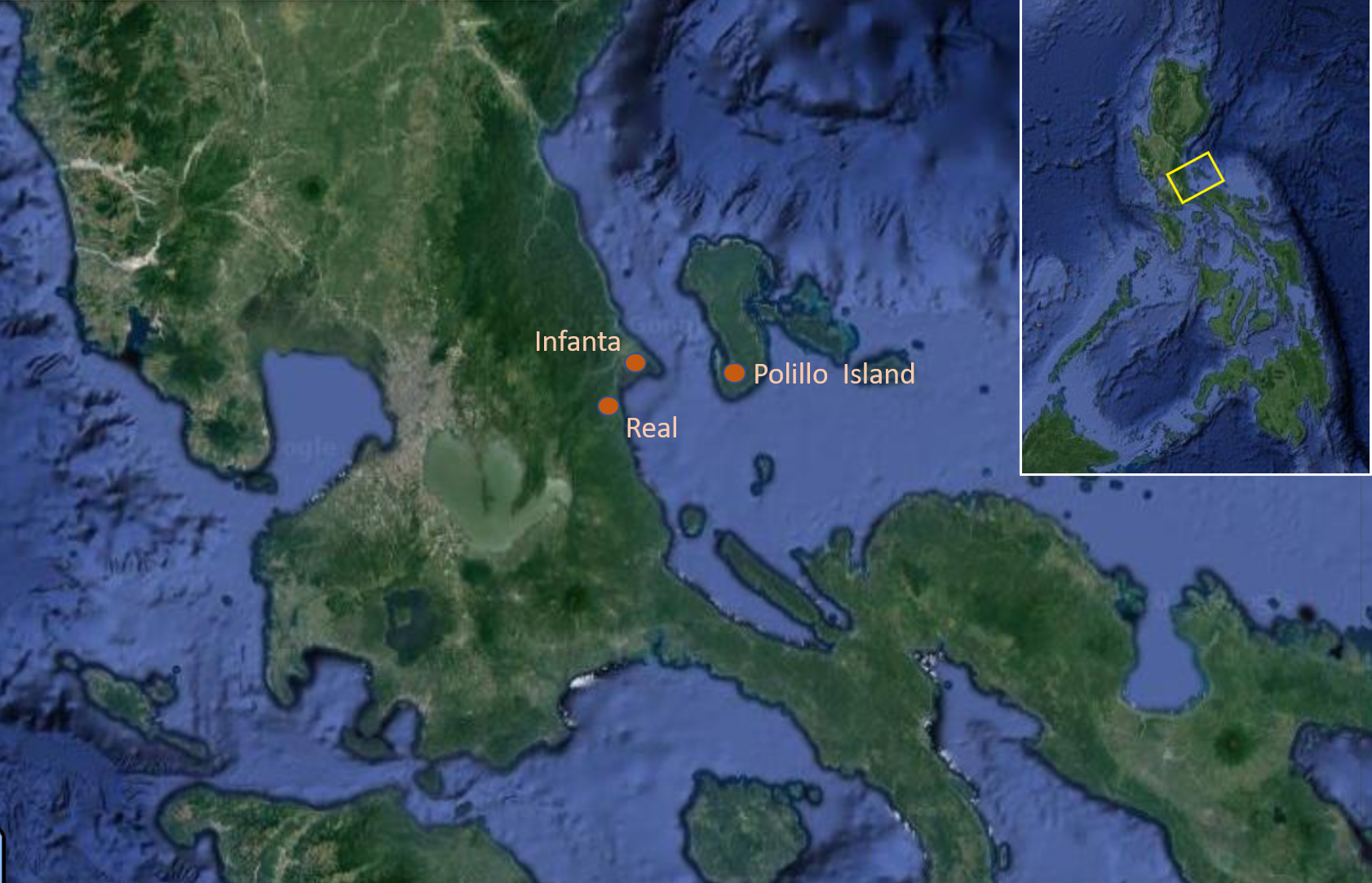 The trip provided an important counterpoint to my own dissertation which seeks to explore the effects of changes in land use in the Southern Luzon region during the Spanish Colonial Period. My research, funded by the project: ”Pantropocene: Finding a Pre-industrial, Pan-tropical ‘Anthropocene’’ headed by Patrick Roberts of the Max Planck Institute of the Science of Human History (MPI-SHH), will attempt to look into these changes at multiple spatial and temporal scales, using methods ranging from palaeoenvironmental coring to archival research. Like the PANTROPOCENE project, the Infanta and Real work sought to also contribute to contemporary tourism and heritage management, and we were accompanied by representatives of the Tourism Office to document the natural resources and tangible and intangible cultural heritage of the region.

There are a range of “publics” that are invested in what a future archaeological project in Infanta and Real can offer. Mayor Filipina America, for example, is interested in how Infanta can cope with, or lessen the effects of, future natural disasters. Infanta, Real, and General Nakar were towns badly hit because of three successive typhoons hitting landfall in 2004. The event has left an indelible mark—townspeople use “2004” as a shorthand to refer to the difficulties that befell them. Historical and archaeological research into past land-use and human responses to hazards have already shown significant promise in contributing to present-day assessments and projections (e.g., Ellis 2021; Findley et al. 2022; Hughes et al. 2018; Morrison et al. 2021; Rick and Sandweiss 2020). On the other hand, the Tourism Office has an ongoing project that will develop these areas to generate more tourism and economic benefits for the town and its inhabitants. 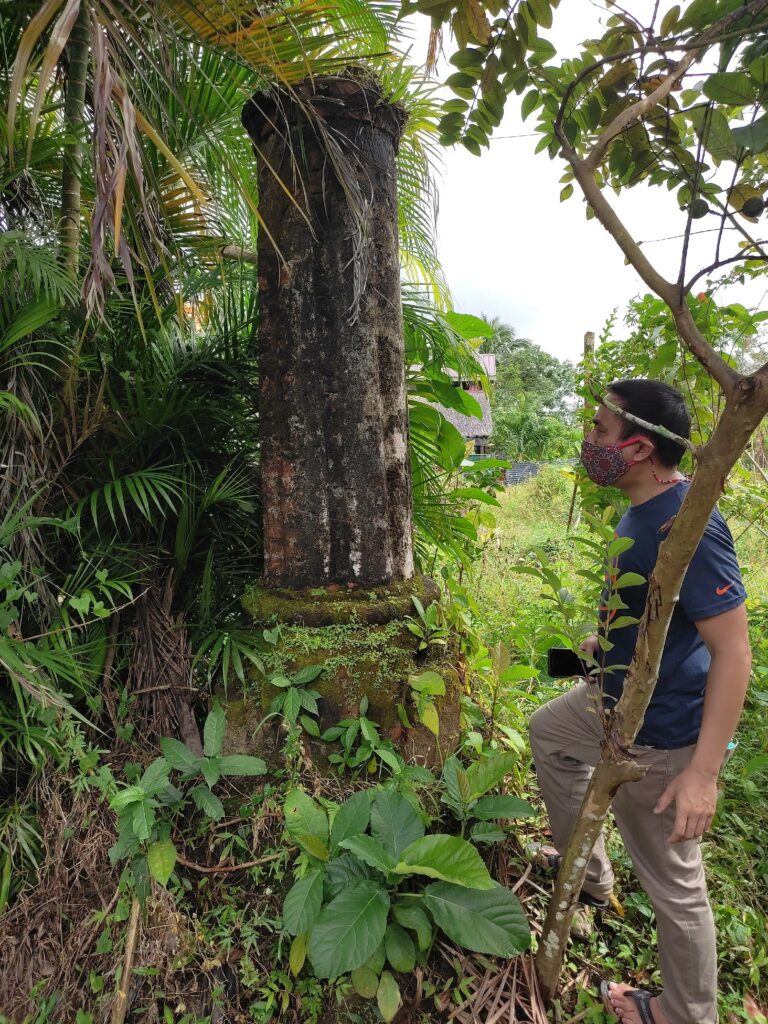 Figure 2. Stone column in what was believed to be church ruins (Image by M. Mabanag)

The aim of this visit was to assess the existence and state of archaeological sites based on Jhun’s historical research, as well as to determine how they fit into broader understandings of landscape change and human-environment interactions across the colonial period in the Philippines more generally. The sites included what has been interpreted as the old cemetery in what is now the Mababang Paaralan ng Infanta Sentral (Infanta Central Elementary School). Locals point to the discovery of a few tisa (brick) pieces during the construction of a new building inside the school grounds. This interpretation is mainly informed by the area south of the school’s location. Across the street, south of the street originally called Calle Real, lays a smattering of stone ruin structures such as the remains of what appears to be a column with a base composed of bricks (Fig. 2). Inside the compound as well are standing structures believed to be what was left of walls of two different churches built at different times. 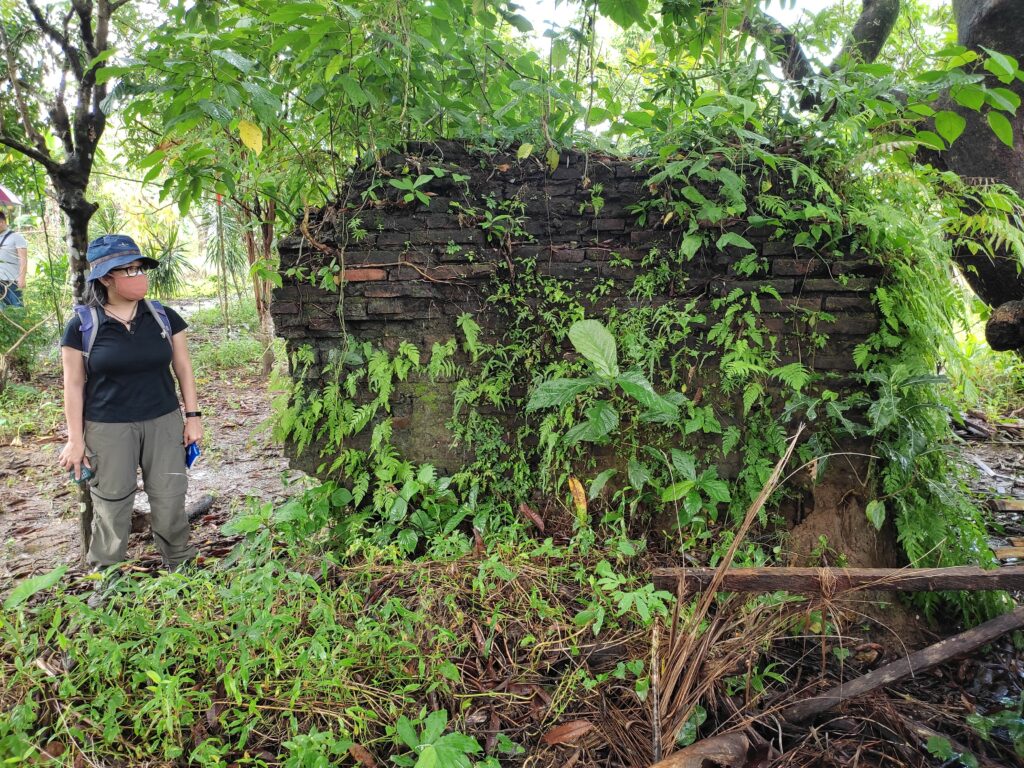 Jhun cited a source where it details that a new red-brick church (Fig. 3) was built after the old church fell into disrepair. Currently, the area is also being used as a school and dormitory for indigenous Dumagat children being educated under the supervision of Father Pedro Montallana, a member of the Prelature of Infanta. The site is also planted to gabi or taro (Colocasia esculenta) which is main food source for the priest, Dumagat children, and other people working in the school, and this has been a crucial crop in the Philippines for many thousands of years. There were also tisa found during the construction of the shower areas of the school according to Father Pedro. South of this concentration of ruin structures, lies a red-brick floor on public road. This has been interpreted as the entrance to the old church.

Other sites that have the potential for further investigation in the region include the Puerto Real De Lampon (Royal Port), Castillo Real, and the Embocadero de Polo in Real town. However, these were partially obscured by high tide when we visited. According to sources, Spanish galleons docked in Royal Port where cargo were unloaded to be distributed further inland. Puerto Real De Misua (Fig. 4), now known as Silangan Port (in Barangay Silangan), in Infanta is also a main entrepot for the distribution of goods. During our visit, dock workers were unloading copra, banana, and other goods from a batel (small wooden cargo boat). Batels are also used to transport people from Polillo Island, an island east of Infanta, to the mainland. Another important part of the galleon route, it is said, is Pinaglapatan River which we were able to see up close when we visited Santa Monica Beach Resort located in Barangay Boboin. 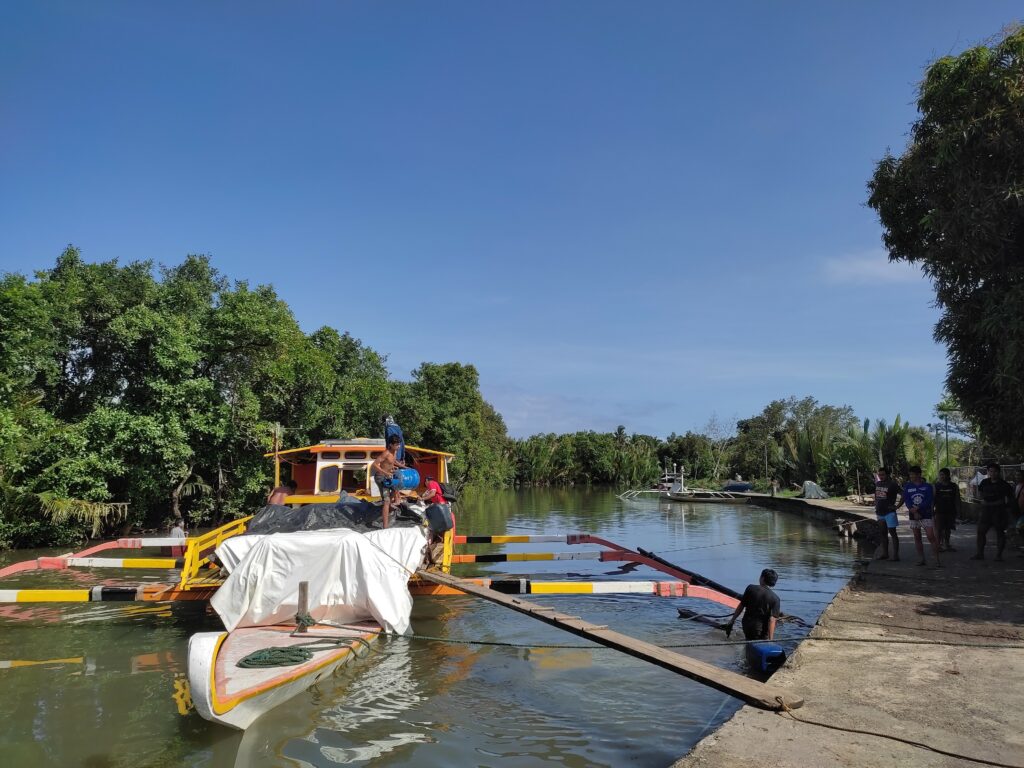 In Barangay Balobo, we visited a neighborhood potohan (traditional distillery) of lambanog (palm liquor) just as the owner was making his finest spirits. Potohans are small-scale operations which use distillery equipment made up of a hodge-podge of materials from clay, bricks, wooden bucket, and metal pipes. Using readily available materials, the distillery equipment in potohan mimics the copper stills used in more established distilleries (called lambiques). We also went to the mangrove area where the distiller gets sasa or nipa palm (Nypa fruticans) supply only around 10 meters east of his potohan. Nipa palm or mangrove palm is a species native to coastlines or estuarine environments. They are an invasive species which can inhibit the growth of other mangrove tree species. According to the potohan owner’s son, a kibal (fully mature nipa palm fruit) takes two months to be ready to be cut (Fig. 5). The sap from the stalk of the kibal is collected to distill for lambanog-making. It takes about thirty clusters of kibal to produce 1.5 gallons.

The last site we visited was by the Balobo River. According to our informant, Barangay Chairman Melchor Rodriguez, an earthenware jar was recovered during work to create a fishpond back in the 1970’s. The jar or gusi (local term for a Chinese stoneware jar) is described as one having dragon design which contained bones inside. According to Mr. Rodriguez, the owner of the fishpond found a set of broken earthenware sherds during a second series of dredging activity of the river for expansion. When the team got to the site, we found a few pieces of freshly broken earthenware sherds on the ground. These surface materials hints at the long-term, pre-Spanish history of the region that could provide further avenues for archaeological investigation in the future.

Following the three-day visit, it became clear, that Infanta and Real would provide an important comparison for my own dissertation project. The initial aim of my project was to analyze data from sites in Laguna and Batangas that extends from 1000 years BP to the Spanish Colonial Period. From what we have seen during this archaeological survey, I think incorporating Quezon will offer a wider lens to which I can view the effects of land use of Indigenous peoples and the changes to these practices once a new, foreign people came and settled in the Philippines. Specifically, I want to understand whether Indigenous practices resulted to measurably adverse effects in the landscape. Did their land use practices lead to changes in vegetation cover? Indigenous peoples have been called “nature ecologists” because they have an in-depth knowledge through generations and generations of experience in negotiating with their natural environment. As someone who believes in Traditional Ecological Knowledge (TEK), it is interesting for me to understand how these same practices may have changed over time because of external factors such as the coming of a new people. Attendant to this concern is quantifying the extent to which the practices of a foreign people deviated from what has been in practice for the longest time. 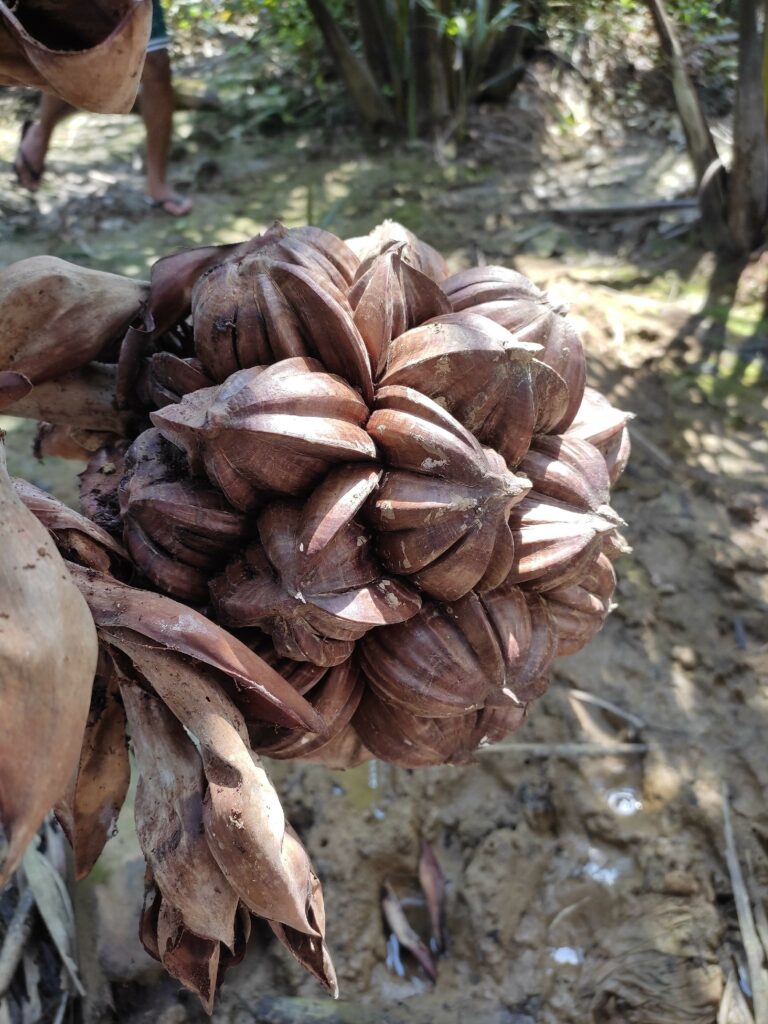 View all posts by Mark Mabanag

We often see the same photo from Oldupai Gorge, Tanzania, of "The Castle." Great spot for photography, even if it is not very interesting archaeologically.

For #FielworkFriday, here are some other photos showing how photogenic Oldupai is beyond the standard view of The Castle.

It was a pleasure hosting @fynbospollen from @The_Palaeolab to meet the #boomplaas team and showcase African palynology research excellence. @fynbospollen will be analyzing the project’s hyrax midden pollen records.

One of our key #Pantropica members @RobertPatalano, host of our Talkin' Tropics podcast, is starting a new adventure @BryantUniv. We wish you all the best Bob, and can't wait to see where this journey takes you!

Today is the first day of the new school year and my first as Lecturer at @BryantUniv. Great to be back in the classroom, and yes @KellyPatalano made me take a “first day of school” photo!